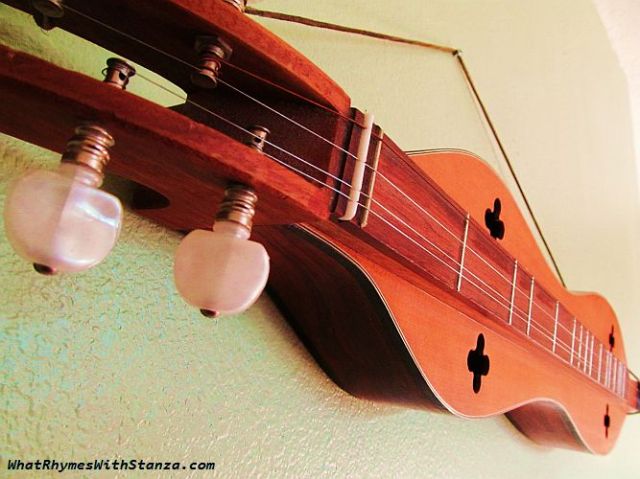 I was having some windows installed in my home last week, and one of the construction crew members, while walking through my living room, stopped and pointed to the wall behind me.

“What’s that?” he asked in a way that made me wonder if someone had perhaps snuck in a boar’s head and mounted it on my unsuspecting wall. I turned to look. Oh, that.

“It’s a dulcimer,” I told him, and proceeded to answer his questions about the instrument. Where it originated, what type of music one played on it, etc.

“Wow!” He continued to stare at it with that boar’s-head-on-the-wall type of fascination. “That’s a real conversation piece!”

I guess my dulcimer would fall into that category. I think it’s beautiful. It does carry special meaning for me. And yet – to me – it has become rather “mundane.” I see it hanging on my wall each day. I dust it occasionally (okay, rarely). And very rarely, I take it down and actually try to play the darn thing.

It’s interesting to think about how the term “mundane” is such a personal concept. It’s quite possible that I could walk into that construction worker’s home and see a boar’s head hanging on his wall. My reaction would likely be, “What’s that?” and he would reply, “Oh, that’s Reggie. Or what’s left of the little tyke. He was one helluva pig.”

So if you’re looking through the other entries to the photo challenge and you come across a picture of a boar’s head mounted on a wall, it’s probably a photo of Reggie that my construction worker posted on his blog.

I just hope my construction worker is as good at installing windows as he is at photography, blogging, taming wild boars, and taxidermy.

Wow! He’s a busy guy! I guess it’s no wonder he never found time to take up the dulcimer.