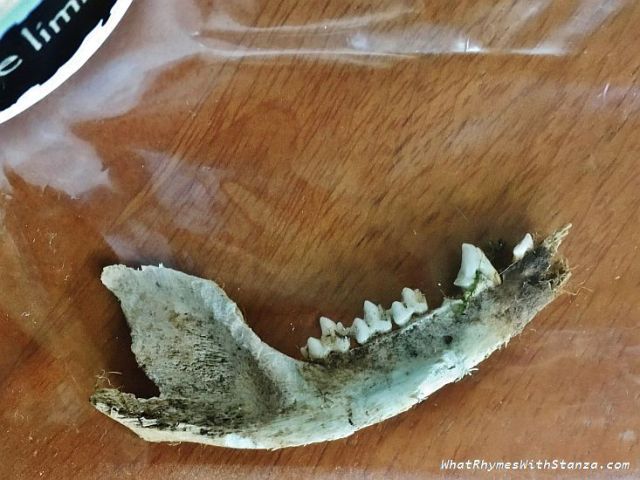 If we were having coffee, I would tell you that my adventures in landscaping continue.

I pulled some more railroad ties out from the dirt bank that they were supposed to be supporting in my back yard. In reality, the ties were so rotten that the only things holding them against the bank were plant roots that had laced their way through the crumbling wood.

One railroad tie held a defunct wasp nest that dropped out in pieces when I moved the tie. Ah, yes. I remember that nest well.

My lawnmower had inadvertently upset the demon insects a couple of years ago, and they had come pouring out of the holes in the railroad tie intent on retaliation. Unfortunately, the lawnmower pointed the finger at me, and so I was the recipient of multiple wasp stings, wasps caught in my hair, and wasps in my house where they had pursued me when I attempted to escape.

My first thought, when I picked up the crumbly layers and saw the wasp carcasses stuck in the pockets of the nest, was – well, not charitable.

My second thought was, “Hey, I bet my granddaughter would find this interesting!” So when my daughter stopped by the house a few days later, I gifted her with the erstwhile insects to share with her little one. She was thrilled!

If we were having coffee, you’d probably be making a mental note to not invite me to participate in your Secret Santa pool. Hard telling what anonymous gifts might end up in the mix.

But, wait! It gets better!

Yesterday when raking leaves in my back yard I uncovered a small jawbone with some ragged-looking teeth still in residence.

My first thought was, “Hey, I bet my granddaughter would find this interesting!”

My second thought was, “Wow, my granddaughter is going to think I’m really weird if I keep giving her dead things.”

I’m not sure to what species the teeth belong. Opossum? Cat? Raccoon? Regardless, the mystery mandible is in a plastic baggy on top of my fridge, awaiting pick up by my daughter. She’ll be thrilled!

Would you like more coffee? I’ve got something else to show you that I found in the back yard the other day.

Oh, you have to leave now? Well that was sudden, but okay. I’ll just tuck it away to show you next time.

Trust me, you’ll be thrilled!

Thanks to Diana at PartTimeMonsterBlog.com for hosting the #weekendcoffeeshare.