I don’t generally contemplate superheroes and superpowers. I didn’t read comic books as a kid, and I didn’t play with superpeople action figures.

If there were superhero video games – actually if there were any video games – in those long ago days, I was oblivious to their existence. The only game I knew that employed a joystick was Rock ‘Em Sock ‘Em Robots.

I do recall watching Batman and Robin on TV, but the only real superpower they seemed to have was the ability to slide down a fire pole and arrive at the bottom dressed in full crime-fighting regalia. I don’t recall ever seeing how they got back into their civvies after saving Gotham City and returning to the bat cave. Maybe they shinnied back up the pole, gathering back the bits and pieces of clothing from where they had been shucked on the way down.

It would appear that superheroes don’t generally get to choose their special powers. Spiderman was accidentally bitten by a radioactive spider. He may have wanted to grow up to be a human cannonball, but no – the errant arachnid consigned him to scaling walls and spewing dental floss from his palms.

Superman was born with his powers, which weren’t even “super” on his planet of birth; they just appeared so to the non-super types here on Earth. Wonder Woman’s powers were gifts from the Greek gods. I doubt she got to pick her gifts. You know how Greek gods are, always wanting things done their way.

As to my own superpower… well, I have the power to see things that aren’t there. No, I don’t hallucinate. Let me rephrase a bit. You know those intuitive types of people who can see past facades and insincerities? It is often said of them that they see situations and people for what they truly are. I, on the other hand, see things for what they’re not.

It usually starts innocently enough. I’ll be going about my own business when something random unexpectedly catches my eye. A thought bubble appears above my head that says, “Hmmm.” Which is shorthand (or short-brain?) for “That looks interesting. I wonder what I could not do with that.” And then I turn it something it’s not. 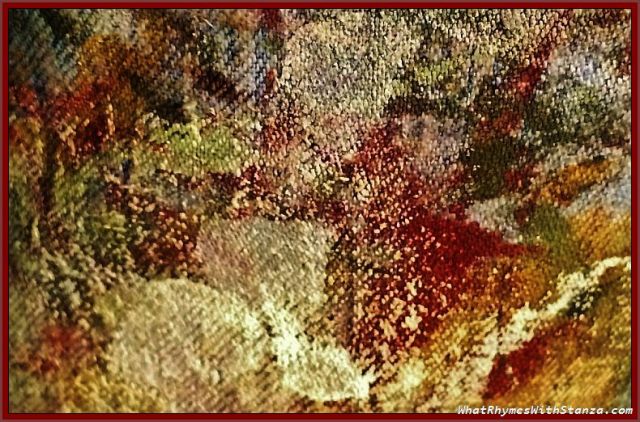 or my yard debris turns into a wood carving:

or a sheet of carbon paper becomes a photo series:

One might think this superpower of mine is not very useful for fighting crime, evil and injustice everywhere. And one would be correct. But it does fight boredom, taking-oneself-too-seriousness and creative block.

I think I should get a costume.  And a sidekick. And an alter ego moniker. Hmmm…

Just call me the Hmmm-inator. Or not.