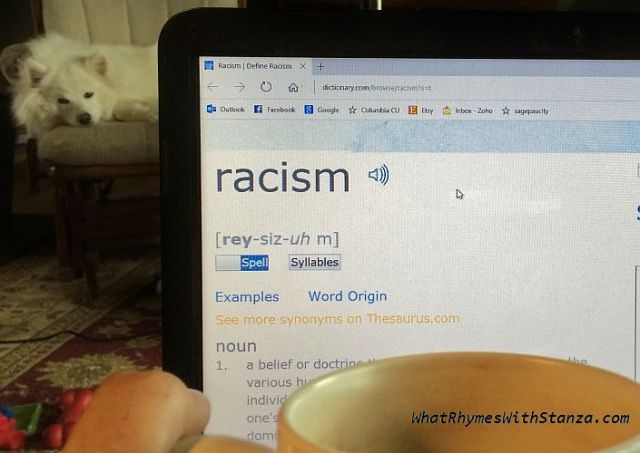 If we were having coffee, I would probably break from my policy of avoiding politics, religion and controversial current affairs. As much as I want to sit with you and talk about how I got the baseboards put on in my living room this week, what’s really on my mind is racial tension, violence, gun control and stereotyping.

I am reluctant to discuss these topics, mostly because I can’t wrap my head around the entirety of the issues. I know I’m not alone in that incapacity, but I don’t want to become yet another voice spewing out my biased rhetoric on matters that I can’t even begin to understand.

I guess there are points of moderation between silence and ranting, and maybe those are the voices we really need to hear. And maybe that’s the voice I need to be. I don’t know.

I grew up in a small town in Oregon. A very white small town. Throughout my twelve years of schooling there, I remember there only ever being one black student in my class. It was in third grade, I think, and he wasn’t even there the whole school year. I don’t remember anything about him other than the color of his skin, but I don’t remember much of anything about those years at all. Or subsequent years. Or this year.

When I went to college, my first roommate was a black Jamaican woman. She told me I was racist because I made distinctions between blacks and whites. Well, there are distinctions. Skin color being the most obvious. And I’m pretty sure she noticed I was white, but I don’t think that made her racist.

I thought I was a racist, but it turns out I’m not. I looked up the word racism in the dictionary. It talks about believing that there are intrinsic differences among races that make one race superior to another. That’s not me at all. (I do think that animals are superior to humans, but that’s another matter entirely.)

I do have biases. I lack exposure to many ideas/cultures/life situations, which leads me to “fill in the gaps” with notions based on my own life experience (or lack thereof). And that’s probably the germ of many misunderstandings right there.

That’s something I can do something about. I can seek to broaden my own understanding and perhaps in doing so, I can cause a ripple that will expand to those around me. Will that stop racism? That depends on how far the ripple spreads, and on how many other ripples are created by other persons.

At the very least, it beats silence and it beats ranting. And it certainly beats killing one another.

Looks like our coffees have gotten cold, so I’ll leave religion and politics for another time. Today I’ll be filling in gouges in my old hardwood floor. And I’ll be pondering the nature of humankind and my responsibility in helping to improve understanding across racial/cultural/social/economic divides.

Sounds like a busy day. Thanks for stopping by and letting me practice speaking and hearing my own voice.

Thank you to Diana at ParttimeMonster.com for hosting the #WeekendCoffeeShare.